I Make My Own Future is a film about Alaa, a 15-year-old boy from Jobar, Syria. During the war, his father was kidnapped, and in 2012 his family had to move to Lebanon. Alaa works in a restaurant to support his family – he isn’t studying because he doesn’t have official papers. Hearing that there is an organisation looking for adolescents to act in play, Alaa applies and auditions. After getting the opportunity to perform in two productions, Alaa realises that acting his passion. I Make My Own Future is a short documentary about Alaa’s life in Lebanon. 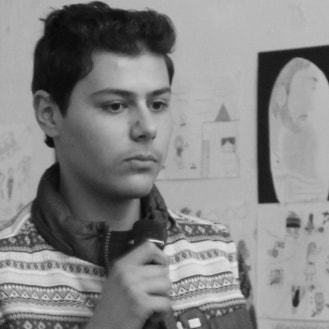 Mohammed Shurbaji is a Syrian student. He was born in 2000, and moved to Lebanon in 2015. He lives in Taalabayya, Bekaa. He has attended several workshops, including: cinematic filming, theatre performance and photography. He is primarily interested in photography and drawing.