“Return” and “stability” are two words that embody the internal conflict inside each and every refugee. In Lebanon, both Palestinians and Syrians have suffered due to policies that prevent the improvement of camps’ infrastructure – policies which are supposedly to encourage their eventual return. However, the reality of the situation on the ground has forced people to try and improve their conditions without any help from the authorities.

With the support of Ali Al Farrah from Jarahiyya camp for Syrian refugees, and Maha Abadi from Mar Elias camp for Palestinian refugees, Mohamad worked with four children to take photos of their daily life, public services and the inhabitants of the camps in which they live. Each child was given two disposable cameras and asked to take photos of public places and services with the first, and anything they wanted with the second. Mohamad uses the photos to tell a story about recovering despite the challenges. He doesn’t intend to compare the two camps, but simply highlight their different circumstances.

Abdelrahim Bakkar is thirteen years old, born in Homs, Syria and now living in Lebanon for the last four years. Abdelrahim lives in Jarahiyya camp, Al Marj. He studies at the official school near the camp. He is learning to play the Oud and also a member of the same band as Salma. Abdelrahim’s mother works in a school inside the camp. His father emigrated illegally to Germany 18 months ago and they are still waiting to be reunited. Abdelrahman takes part in all the activities the camp has to offer.

Salma Jadaan is thirteen years old, born in Homs, Syria and now living in Lebanon for the last four years. Salma lives in Jarahiyya camp, Al-Marj. She works in her father’s shop and she studies at Jusoor School inside the camp. She is also learning music and is a member of a band. Salma’s mother works in the clinic near their tent and her father has a shop. She takes care of her little brother while her mother is at work and also stays at her father’s shop while he is away. She is interested in visual art but prefers music.

Taha Abo Shleih is twelve years old, born in South Lebanon and living in Mar Elias camp. Taha goes to the UNESCO school. His father works in making and repairing aluminium windows. Taha’s mother is a teacher in Ghassan Kanafani kindergarten inside the camp. Taha spends most of his time at his aunt’s home in South Lebanon but he participates in many of the camp’s activities. He likes photography and drawing. Taha doesn’t talk a lot but he has a quick and sharp mind. He is Omar’s best friend.

Omar Al Moghrabi is twelve years old, born and raised in Mar Elias Camp, Lebanon. Omar goes to the UNESCO school inside the camp. His father is the private driver of a businessman and also a member of the public committee in the camp; he is responsible for fixing water and electrical faults. Omar spends most of his time at school or in the playground. He also participates in most of the activities the camp has to offer. Omar likes to play the role of leader with other children. 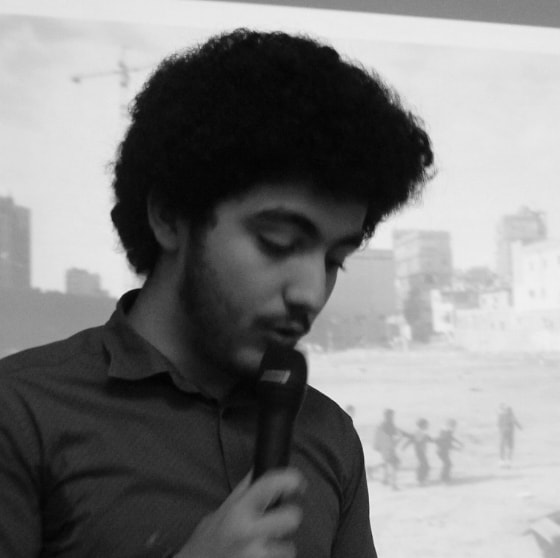 Mohamad Al Jounde is a young man from Hama, Syria, living in Aley, Lebanon. Since participating in the Young Artists programme he has worked as a translator and a theatre facilitator with Seenaryo. He studied photography at Dar El Mussawir for 18 months in Lebanon and took part in a 9-month workshop on documentary making. He has made two documentaries And I went on, about the sufferings of young Syrians and Naser Eldine Altaffar, about a Lebanese rap artist. He went on to do media training and participated in Soura w Hikaya, a photography programme run by Zakira, which culminated in an exhibition at Al Madina Theatre. He is looking to continue his studies and live a normal life in Lebanon.