Optimism sheds light on the obstacles young Syrians are facing in Lebanon and how they deal with the daily challenges they encounter. The film is based on Hassan’s personal experience as a young Syrian man who has been living in Lebanon for over five years.

The main thing that inspired me to write this script was this idea of forced alienation in a country like Lebanon where good jobs and good treatment hardly exist. Syrian, Syrians, Syria…these words become very agonizing when you hear them said in a racist tone. In my opinion, this is not strange in a country that has undergone a cold civil war. Lebanon is a harsh country to many people. I remember my friends who surrendered and emigrated. I have over ten friends who advised me to migrate. I thought: if I don't succeed now then I will never have any success in my life. I didn't give up – I motivated and trained myself to be optimistic. I promised myself I would reach my ambition. I have decided to share my experience with Syrian youths to encourage them to be optimistic. This video performance questions the human ability to train itself to be optimistic amidst the agony that surrounds us, far away from our home country, family and friends. 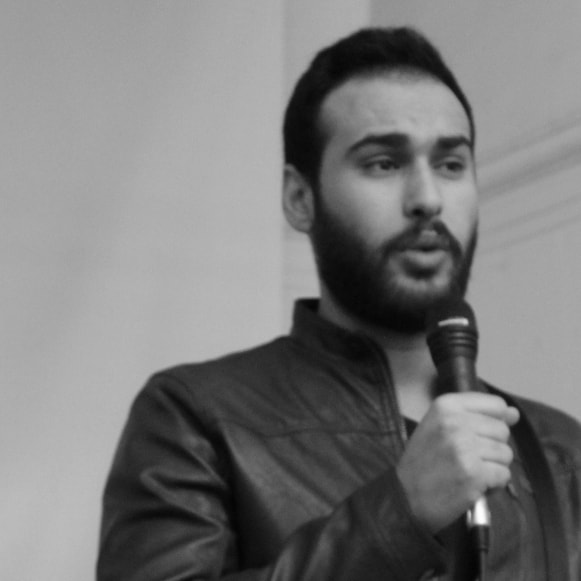 Hassan Akoul was born in 1991 in Alhouleh, Homs, Syria. He studied Business Management at the Lebanese French University in Chtaura, however his passion lies in acting and he is working to improve himself in this field. Hassan has acted in Amal, a series directed by Farah Alama, Karama, a movie directed by Alsadeer Masoud, and many other short films. Most recently he has performed in a children’s theatre production with Ghattas Troupe. He has attended many workshops including: actor training, dramatherapy, and media communications.